The most mislabelled character trope in film review history

Elizabethtown takes the crown for one of the most talked about and yet forgettable indie films of all time. Though not nearly as well loved as films like 500 Days of Summer and Call Me by Your Name, Elizabethtown has one unique claim to fame – it introduced audiences to the Manic Pixie Dream Girl. Film critic, Nathan Rabin coined the term when describing Kirsten Dunst’s character, Claire, a bubbly, fun and free-spirited girl who was created purely to benefit the male protagonist and the male gaze.

Nowadays the term gets thrown around a lot, and even Rabin hates it. In an article titled I’m sorry for coining the phrase ‘Manic Pixie Dream Girl’, Rabin writes that ‘Claire was an unusually pure example of a Manic Pixie Dream Girl — a fancifully, if thinly conceived, flibbertigibbet who has no reason to exist except to cheer up one miserable guy…  I coined the phrase to call out cultural sexism and to make it harder for male writers to posit reductive, condescending male fantasies of ideal women as realistic characters. But I looked on queasily as the phrase was increasingly accused of being sexist itself’.

Though it was never intended to describe cult favourite characters like Ramona Flowers and Annie Hall – Manic Pixie Dream Girl is now a title applied with reckless abandon to every quirky female character to come of an indie film. I’m guilty of misusing the term, and this misuse is what made a term once intended to call out misogyny, misogynistic in itself. By grouping all female characters that vaguely fit the mould, we assume that if real women and realistic characters are at all quirky, off-beat and delightful, they are only trying to be or created to be desired by men.

Ramona Flowers acts spontaneous, exists as Scott’s fantasy, and leads him to his entire character arc, but the thing is… she doesn’t. She lives by routine and dyes her hair every one-and-a-half weeks (and dresses to match). She has a life, a job and her own friends. She isn’t here to facilitate Scott’s growth, and even dumps him when she realises that he isn’t the nice guy she thought he was. Ramona isn’t here to make a man happy, and she never has been. She’s too busy for that. Now, I would like to mention that I don’t fully agree with how she was portrayed in the film, but labelling her as a Manic Pixie Dream Girl fully discredits the qualities we see in movie, and more importantly, book Ramona. 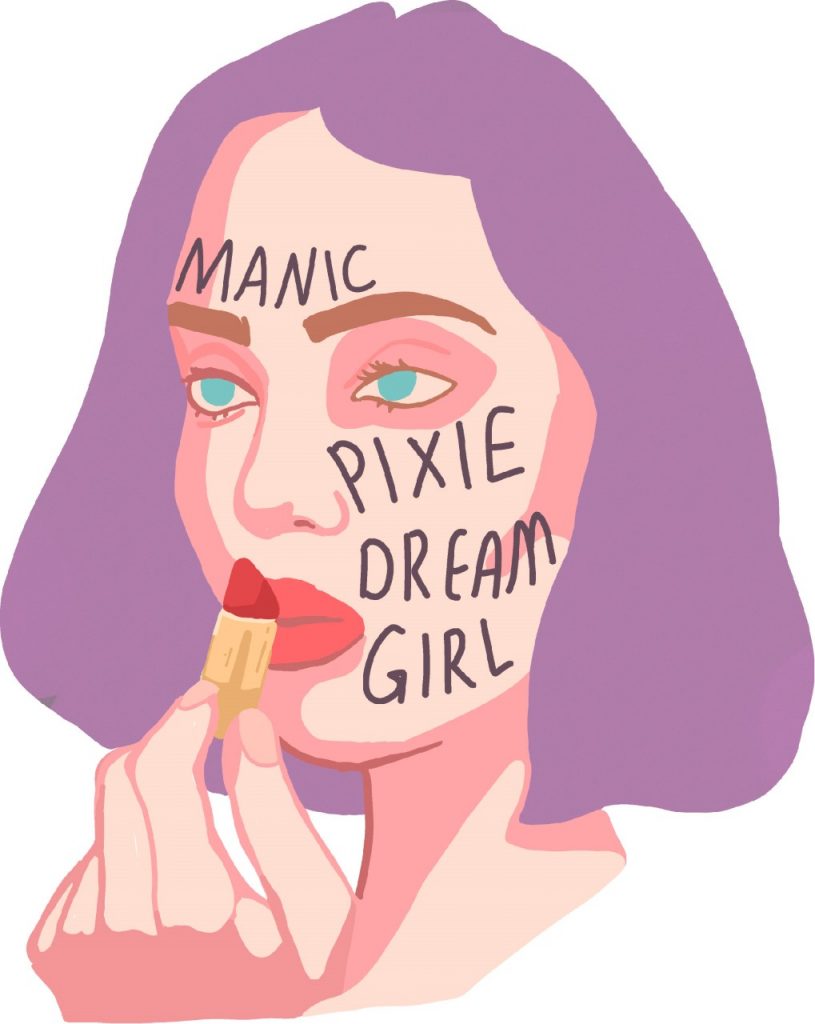 This can be argued for a lot of supposed Manic Pixie Dream Girls. The problem is, a true Manic Pixie Dream Girl is a poorly written character. When we start using the term to refer to all fun, pretty, fantasy like women (and men) who date main protagonists, we perpetuate that being fun, pretty and fantasy like is reason enough for this character to exist, rather than looking any deeper into what makes a person. Ramona Flowers is a woman dealing with abusive exes she cannot escape from, with her own past and her own yet to be determined future. She and other mislabelled Manic Pixie Dream Girls aren’t just created for fan service – they are often representative of real people with real quirks and real flaws (even if they are a glorified version).

So, readers, if you aren’t sick of the term after reading it a hundred times in this article, I have one thing to say to you.

Read it until you hate it.